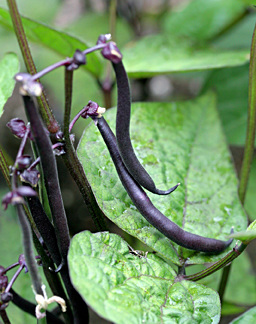 The Royalty Purple Podded bean is a variety of Phaseolus vulgaris. L (a kind of common bean) (Yeager &  Meader, 1957; CGIAR, 2016). Beans a kind of legume are known for their  ability to fix nitrogen in the soil via a symbiotic relationship with bacteria    housed in nodules attached to the plant’s root system (Frame, 2005). They    are considered to be a rich source of protein, oil, and many B vitamins    (thiamine, riboflavin, and nicotinic acid for instance) (FAO, 2016). They are    also noted to be a good supplementary crop for many cereal crops as they     compensate for the missing essential amino acid lysine
in cereal grains while the cereals, in turn, provide the needed amino acids       cysteine and methionine needed in human diets (FAO, 2016).
(The Royalty Purple Podded bean (above left)
https://www.anniesannuals.com/signs/b%20-
​%20c/images/bean_royalty.jpg)
Beans grow in soils with a pH between 5.5-7 and between 16–18 °C at night and 22–26 °C in the day (though the Royalty Purple Podded variety was developed to grow in colder temperatures and soils) (Yeaher & Meader, 1957; FAO, 2015). They prefer full sun conditions, however, cannot handle temperatures above 35°C, thus are better suited for the Nepalese hillside regions in lieu of the more tropical Terai (FAO, 2015).
​
The Royalty Purple Podded bean was first developed in the 1950s in the state of New Hampshire (Yeager & Meader, 1957). The variety most notable feature is its bright purple pod found to be a source of anthocyanins (Okonkwo & Clayberg, 1984). These Anthocyanins have been linked in health research with antioxidant capacities and increased protection against many diseases (Lila, 2004). This plant pigment breaks down when boiled causing the beans to turn green, but they can also be eaten raw if the anthocyanins are desired for consumption (The Incredible Seed Company, 2016). The variety has one of the shortest maturation periods, spanning 55 days, which yields an abundant supply of six-inch beans (The Incredible Seed Company, 2016) 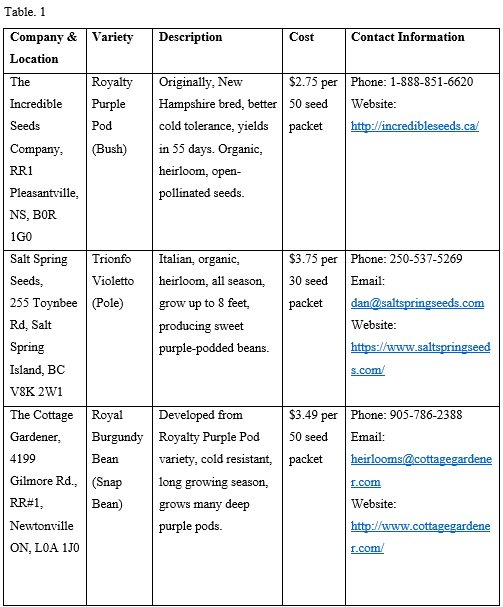